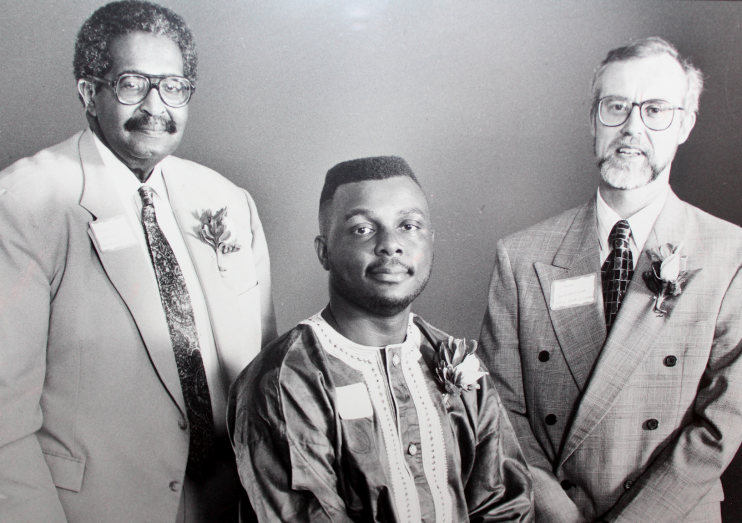 Ed Bell is a serious, dedicated young man who is driven to help poor black youth in New Bern. Just as Ed Bell did when he was growing up, many of the youth he helps live in public housing. At 31, Bell has vivid memories of his childhood.

Only now, conditions for young black people, especially young males, are worse than they were 20 years ago. Crime has increased, and so have the dropout and teen pregnancy rates, and alcohol and drug abuse.

Three years ago, Bell experienced what he calls a "vision from God." He felt compelled to develop and lead a program to help these particularly vulnerable young people. That program, Youth Vision, is making a difference. By all accounts, Youth Vision's success is due to the leadership and commitment of Ed Bell.

Bell is involved in every one of the movement’s goals: to instill dignity, increase self-esteem, augment cultural and social values, and improve scholastic achievement. He is busy with meetings, special events and trips, all designed to provide positive role models, especially for young black males.

Bell’s involvement with Youth Vision is voluntary. By day, he works as a social worker with emotionally or mentally disabled children who have a history of assaultive behavior.

Many people in New Bern are noticing and supporting Youth Vision. Probably the most important supporters are the young people who credit Youth Vision for their unexpectedly bright future prospects.

On February 1, 1960, Franklin McCain and three fellow students at A&T State University took a stand against the injustices of racial segregation as they asked to be served at the Woolworth’s lunch counter in downtown Greensboro. Enduring scorn, hatred and physical threats, these young men stood firm. Their courage and patience paid off by initiating peaceful sit-ins throughout the South.

The event represents a landmark in the struggle for equal treatment of oppressed and disadvantaged groups in America.

That personally monumental event has affected every aspect of McCain's continued commitment to equal justice. A chemist who is successful in the corporate world, McCain continues to be totally committed to working for equal rights.

Perhaps the greatest of McCain’s attributes is his ability to bridge factions. As one who has known him for years said, "It isn’t so much that he is a compromiser. He is very firm in his convictions. He just has a special ability to bring people together."

The most recent example of that skill is his chairmanship of the Committee of Twenty Five, a group dedicated to ensuring equal opportunity for all students in the Charlotte-Mecklenburg school system during a period of change. Another of his causes is leading Charlotte's "Fighting Back" program, which works through training community leaders to reduce the demand for drugs and alcohol. He also works with the North Carolina Committee of the NAACP Legal Defense and Education Fund, and as chair of the National Conference of Christians and Jews in Charlotte.

The public library may be perceived as an unlikely institution to be involved in social and community change. But Steve Sumerford is a rare librarian who has transformed a Greensboro public library into a hotbed of activity that truly serves and changes its poor, predominantly black neighborhood.

Lending books is still important at the Vance H. Chavis Lifelong Learning Library, but much more goes on in and around the small, brick building in southeast Greensboro. Serving young and old, the library offers GED classes, reading improvement, career counseling, Parents Learning Together and after-school tutoring. Other programs go out into the community: lifeskills programs and story times are ongoing at the community homeless shelter and in the waiting rooms at the health department. From his base at Vance Chavis, Sumerford works for the empowerment of all people. He has started or worked with groups to help those in public housing projects.

He promotes literacy projects. He's worked to get AIDS resource kits into all of Greensboro’s public libraries, and he’s campaigned for immunization of all children in Guilford County.

In his college days in the 1970s, Sumerford was an activist and a protester. When he told friends in the 1980s that he planned to go to graduate school in library science, some were surprised. As an activist librarian, Steve Sumerford has continued to surprise them.