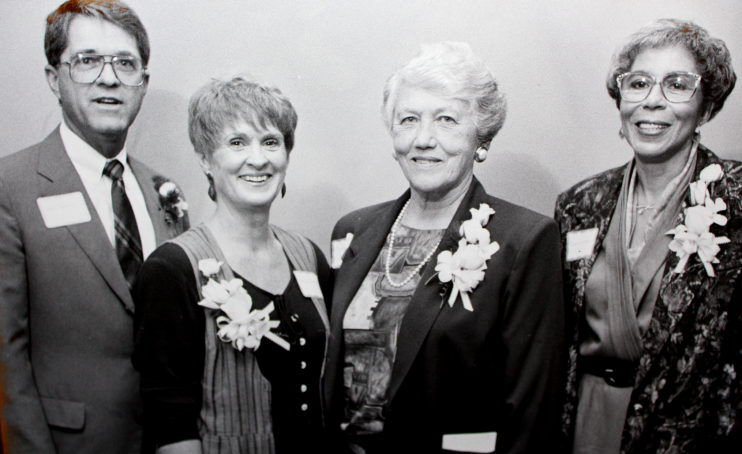 In 1989, Mary Clouse and her family were casualties of an agribusiness system that puts farm-growers at the mercy of large, out-of-state poultry corporations. The Clouses, who had built their farm in Chatham County to raise breeder hens, had their contract pulled because they questioned the unfair, one-sided arrangements they were forced to accept by the corporation that controlled their farm and their livelihood.

Clouse and her husband, John, have survived as cattle farmers, and Mary Clouse has emerged as a full-time advocate for poultry farmers across North Carolina.She has become a major force, established leadership for the National Contract Poultry Growers Association (NCPGA) and published a monthly newsletter that has transformed the lives and spirits of thousands of poultry farmers.

Her example has inspired fellow farmers to speak out, attend meetings and take action to address the structural flaws in the industry in which they are such an important but unrepresented part. To her fellow farmers, Clouse is known as "the Mother of the Movement." Her labors have empowered the chicken and turkey farmers who five years ago were paralyzed by fear and lack of knowledge.

Several times in the past year, Clouse has collapsed from exhaustion. She continues undaunted, demonstrating the practical sense and visionary spirit that have marked her work since the injustice done to her and her family in 1989 spurred her to prevent further injustices to others.

Charity Gambill rarely rests. All her life she has worked hard, as a teenager to earn money for her family and later as a single mother of four. She has held as many as three jobs at once just to feed and clothe her family.

Yet, Charity Gambill has found time to volunteer, serve and lead her rural, mountainous county. In Alleghany, where less than one percent of the population is black, Gambill, the great-granddaughter of a slave, has brought people together to work for common good.

After a high school student died in a traffic accident 25 years ago, Gambill learned first aid and became a charter member of the Alleghany Rescue Squad. Her list of community activities keeps growing - the board of the electric co-op, church, a bereavement support group, the mental health agency, group homes, Special Olympics, economic development and planning for the county.

Most important is Gambill’s work for education and children. A high-school dropout who has been a school bus driver and cafeteria worker, Gambill is in her fourth term on the county school board. She was the first black elected to public office in Alleghany. She also volunteers with Alleghany Connections, through which social services and the courts pair adults with children.

In her native county, people know, respect and love Charity Gambill. In part, this may be so because she listens to what they have to say and incorporates their thoughts and feelings into her own.

Eight years ago, Freddy and Helen Johnson went on a weekend mission trip to Haiti, where they saw unbelievable poverty. That experience set them on a soul-searching journey that took them back to Haiti, to inner-city Atlanta, and, finally, back to their native Raleigh.

The Johnsons realized that they could serve most effectively in Raleigh, where they had been living typical, white, upper middle-class suburban lives. In the spring of 1989, they moved to Halifax Court, an inner-city public housing neighborhood. Their mission was uncertain, but they were dedicated to becoming neighbors in the truest sense to the people of that community.

They got to know the people of the neighborhood and listened to what they had to say. What they heard was: "Help us help our children." That plea became their mission, and it grew into what they called "Building Together Ministry."

The Johnsons and those residents and volunteers affected by Building Together Ministry are guided by the "gospel of neighboring."