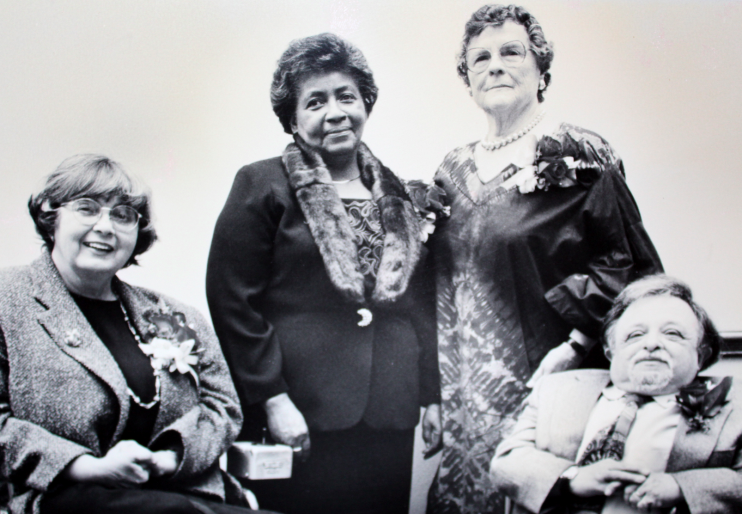 Adeen Lewis George is a woman of incredible faith and courage. An ordained minister, she has no church. Her ministry is in the streets of Goldsboro's poorest neighborhoods. Drug addicts, alcoholics and the homeless are her congregation. She goes to them, fearless and patient, as often as it takes to convince them that there is hope.

Believing her work could be more effective if she had a place where people could come, she toiled for three years to build the Holy Ghost Drawing Center in Goldsboro’s downtrodden Webbtown community. The gleaming center is a testament to Reverend George’s faith. Built mostly by volunteers, it collapsed twice during construction. People from all over Goldsboro were so moved by her dedication and persistence that they helped rebuild.

From the center, she goes out into the neighborhood to seek those who need help. And she brings people to the center to eat, bathe and get clean clothes. If people want to meditate, they can. If they want to change their lives, they can take GED classes.

There are people in Goldsboro who believe Reverend George saved their lives. To them, Adeen Lewis George is a miracle worker.

Barbara Beye Lorie of Pittsboro has been at the forefront of efforts to improve race relations for many years, working tirelessly to ensure the rights of minorities.

Born into an affluent family, she went away to school, married a wealthy merchant, and was a socialite in New York and Palm Beach. Then her marriage disintegrated, her former husband committed suicide, and Lorie was destitute with two young sons.

Those events had a profound influence, but 30 years ago, after Lorie had moved to Chapel Hill, an epiphany occurred. Moved by a civil rights march, she vowed to devote her life to improving race relations.

She began in the schools, which were just beginning to integrate. She worked to ease tensions between black and white students. Against the wishes of her superiors, she taught African-American literature and history. Pressure from administrators led her to finish her teaching career in New York.

When she retired, she moved back to Chatham County and became known as a courageous watchdog and advocate. She is the heart and soul of the Chatham County Political Reform Group, a biracial group that shares stories, forms communities and fights racism. She has helped to elect two black women to the Board of Commissioners. Whenever there’s a need, Lorie is there to fight for equality.

"We're all members of the human race," she says, "just different colors."

Never allowing serious physical disabilities to keep them from leading full and productive lives, Judith and Mike Phillips decided long ago that they had a responsibility not only to themselves and their children but also to disabled people in general. Theirs has been a lifetime of advocacy for disabled people, first in their native Oklahoma, then in Santa Fe, and for the last decade, in Winston-Salem.

Despite chronic pain and daily difficulties, they have never seen themselves as victims. They've led a full life - raising a family, working, traveling, participating in civic events. They’ve also dedicated themselves to helping other disabled people have similar opportunities.

They founded The Adaptables, a group that educates people about the Americans With Disabilities Act and helps disabled people understand their rights. The meetings help build a sense of community. The group also has developed the Gladstone Apartments, a 16-unit building that is a model for the disabled. It has provided computers and training to disabled people.

Focusing on their strengths, the Phillipses have helped countless people realize that life has meaning for everyone.