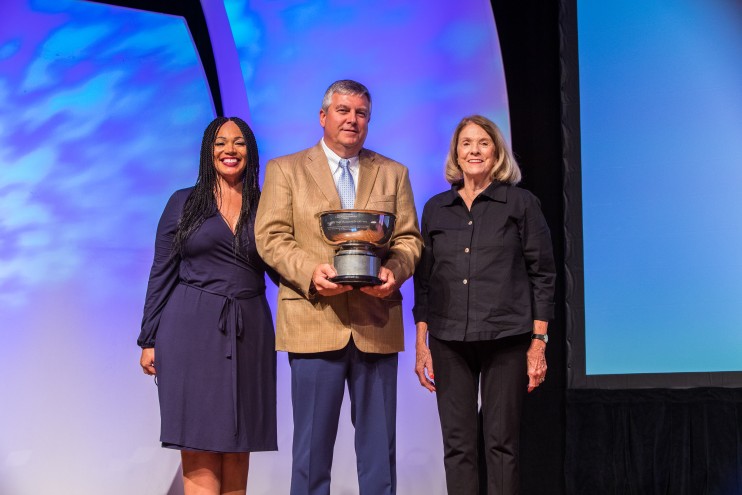 Tweet
On Wednesday, August 28, during the Greensboro Chamber of Commerce's State of Our Community annual luncheon at the Koury Convention Center, the 2019 Hubert B. Humphrey, Jr. School Improvement Award was given to Principal Jim Gibson of Ragsdale High School. Presented by the Community Foundation of Greater Greensboro and the Z. Smith Reynolds Foundation, the award is based on 10 objective, data-driven performance metrics that track the progress each school makes from the beginning of the school year to the end.
The award is named in honor and in memory of the life and contributions of Hubert B. Humphrey, Jr., who served as a Trustee of the Z. Smith Reynolds Foundation for more than 20 years. Mr. Humphrey was considered one of Guilford County's, and North Carolina's, most remarkable residents. He was an exceptional lawyer, civic leader and public servant. He was named one of the Best Lawyers in America, served in both houses of the North Carolina General Assembly, was a chair of the board of trustees at both Wake Forest University and UNC Greensboro.
The award winner receives a check in the amount of $10,000 to be used to strengthen and develop the entire staff of the school. The winner's name is also inscribed on the Hugh Humphrey cup.