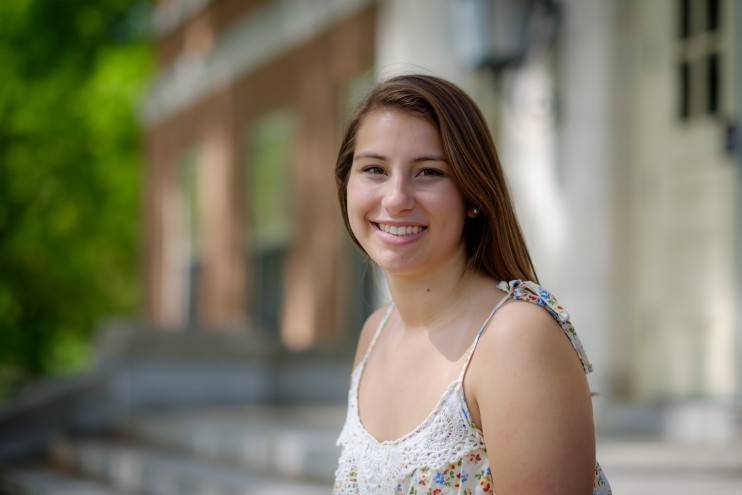 Marian Isdahl of Raleigh, NC, is junior at Wake Forest University, and is majoring in Health and Exercise Science with minors in Health Policy Administration and Psychology. Marian is a Reynolds North Carolina Scholar. Made possible by the Z. Smith Reynolds Foundation, the scholarship was first awarded in 2001 and assists North Carolina students from middle income families.

Marian is a forward-looking student, who has a clear goal of finding her voice inside and outside, of the classroom, no matter what challenges she may face.

As a young child, Marian was diagnosed with Apraxia, which is a very serious speech impediment that requires intensive speech therapy for a number of years. Because of this, Marian realized the importance of communication from an early age. Working hard to find a voice of her own was a part of her daily life, even outside of therapy, and has continued throughout her university experience.

As part of her major, Marian has learned what it means to live in a society where there is so much mystery around healthcare and the healthcare system.

“I am a bit ashamed to say that I didn’t know as much as I thought I did about our healthcare system, but I am taking my newfound knowledge to India, South Africa, and Brazil in August, studying public health worldwide in order to help others understand their health and healthcare system.”

When Marian first came to Wake Forest, she joined a few organizations on campus – including Deacon Camp, Events Resource Management, CHARGE – taking on smaller roles to get her feet wet. As she did more exploration and found what she was passionate about, she became involved in other organizations, taking on bigger roles and more responsibilities with those that she initially joined. This active participation caught the eye of many, and earned her higher-ranking positions such a President’s Aid.

She says that this sort of a role gives her the opportunity – and what she says is the privilege – to represent the student body as a liaison to the Office of the President.

She is also grateful for the opportunities she has had through the Reynolds North Carolina Scholarship.

“The Z. Smith Reynolds Foundation invested in me and it has showed that people believe in me. I am so thankful. I want to give back in that way, entering into a field of health service.”

Marian believes that it is important to recognize, and appreciate, all those who have invested their time and energy into the success of an individual.

“Whether your investors are your friends, your family, yourself, or an organization like the Z. Smith Reynolds Foundation, remember you owe it to them to achieve greatness. Take advantage of the school and the situation you are in. Jump in and get involved as high up as you can. And it will pay off. Always give back, because if it wasn’t for people giving you wouldn’t be where you’re standing."