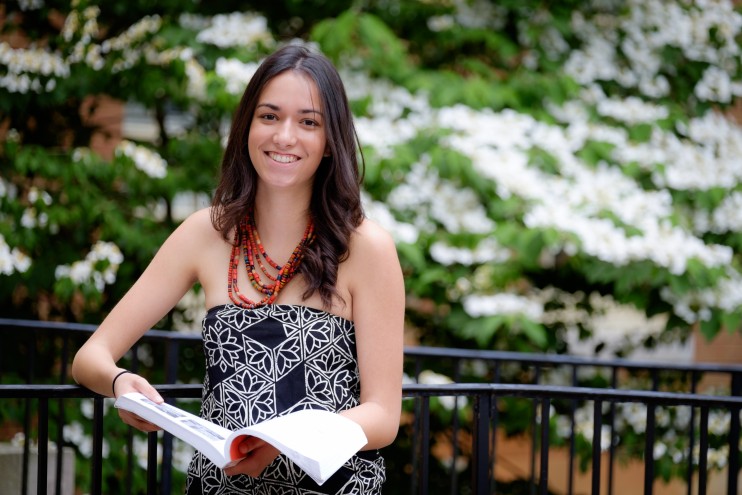 Sara Borchers is a junior at Wake Forest University. She is also a first-generation American, a member of Deacon Dhamaal (Wake Forest's Indian fusion dance team), a Spanish speaker, a crusader for environmental causes, an aspiring physician and researcher, and a Nancy Susan Reynolds Scholar. Made possible by the Z. Smith Reynolds Foundation, the Nancy Susan Reynolds Scholarship is awarded to up to six extraordinary students entering Wake Forest University. Scholars may also receive additional funds each summer for approved travel or study projects.

We recently sat down with Sara to discuss her undergraduate experience at Wake Forest and to find out how she manages to balance academics and all of her on-campus activities.

Why did you choose Wake Forest University?

Well, this is pretty far from home for me. I'm from Livermore, California. My parents are both immigrants though, and my whole family is still in India and Germany. I looked at a few different schools. Some in California and also Wake Forest. I wanted to go to a smaller school, and looked at universities that offered merit-based aid. They picked around 30 finalists during my senior year of high school for this scholarship and flew us down to Wake Forest for four days of interviews. It was pretty stressful. I didn't let myself like the school at first because I wasn't sure if I would get in!

You are double-majoring in Biology and Spanish. How do you juggle both subjects?

I really like science. I love the earth and nature in general. I'm pre-med, so for me there's a good amount of overlap between the two. In high school I was really into Spanish and didn't want to lose touch with the language. My sister took Spanish courses in college and I could see how much of a difference it made when she studied abroad in Chile. I want to join Doctors Without Borders after (and if) I go to medical school, and I think it's good to be able to connect culturally to where you're sent.

Tell us about your own study abroad experience.

I went to Salamanca last semester. It was almost chosen for me; with the pre-med track I needed a science class abroad and Salamanca checked that box. As part of the program, everyone is put in a homestay, which really helps you connect with the culture and forces you to speak Spanish all the time. By the end I was thinking and dreaming in Spanish. I've taken Spanish classes since 7th grade, but I was still self-conscious about speaking Spanish in front of other people. Now I use any excuse to speak Spanish. I don't want to call myself fluent - because I think that's a different level - but I can be understood. It's a big confidence booster!

You continued your studies abroad by joining the Biology department and CEES (the Center for Energy, Environment and Sustainability) on their trip to Belize this past spring break. Tell us about that trip.

It was one of the best weeks of my life. It was awesome to see how health of the environment affects human health, which are my two areas of interest. We read so many papers on the subject before going, so we had a good grasp on oceanology and environmental policy. We were able to see firsthand the role that a simple law can make on a shark population. Even if you don't read anything, and you're not a biologist, if you jump into that clear water and see this whole new world, you realize how much you want to protect it. I think it’s so important that passionate people speak up for the environment and that there are people who care. The reality is, most of the time the environment loses so we have to speak on nature's behalf.

What do you plan to do this summer?

I have a biomedical research internship in Australia, affiliated through the University of Sydney. I've been trying to figure out whether I want to be a physician or go into research for a while now. I've been doing genetic research on campus at Wake Forest, but I've taken a lot of classes on ecology and conservation, too. I always knew I wanted to be a Biology major, but before college I wasn't interested in environmental stuff. I took Biology 113, which is focused on ecology, during freshman year and thought I don’t really want to take this. Now look at me! I'm really grateful I was almost forced to think about the environment and climate change. It changes the way you live.

What has this scholarship meant to you?