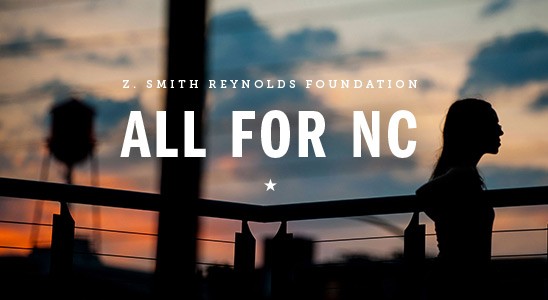 It is hard to believe that we are nearing the end of 2017. For many, including all of us at the Z. Smith Reynolds Foundation, this has been a big year. While much has happened across our state, nation and country, we thought we’d take a moment to reflect on, and recap, some of the Foundation’s 2017 milestones as we prepare to enter a new year.

During the first half of 2017, the Foundation was heavily engaged in our strategic assessment and planning process, which we began in May 2016. In February, we completed our five-month Mo Wants to Know listening and learning tour. From May 2016 through May 2017, Trustees and staff poured over the data, and stories, we collected throughout the entire process to identify themes and a path forward for the Foundation that would reflect what we heard and learned.

In June, we wrapped up our yearlong strategic assessment and planning process and provided an update on our new emerging direction.

Hopefully you’ve had a chance to review our microsite – All For NC – which lays out the journey we took in getting us to our emerging direction, including sharing what we heard from North Carolinians and what we learned from a variety of data sources.

We are in the midst of developing and designing each of the strategies of the emerging direction, which include a state-level strategy, a community-based strategy, and an exploratory, visionary ideas strategy. We are continuing to conduct due diligence, research, and outreach to various stakeholders as we go through this process. We also have committed to adhering to our core values and racial equity lens to guide the design and development of each of these strategies.

Along with the three main strategies of our emerging direction, Trustees expressed their commitment to ZSR being a learning organization and continuing to augment our participation in our home community of Winston-Salem/Forsyth County. The latter will be an ongoing process that will include monetary and non-monetary investments. One of the ways in which ZSR began to demonstrate this commitment in 2017 was by making grants to two organizations that are already doing incredible work to strengthen and enhance the communities which they serve, including:

- Partnering with Neighbors for Better Neighborhoods to provide $15,000 to its Grassroots Grants Program – a program that seeks to strengthen neighborhoods in Winston-Salem and Forsyth County by supporting a wide range of community-based initiatives; and

- Partnering with The Winston-Salem Foundation to provide $5,000 to Youth Grantmakers in Action – a program that works to engage a diverse group of youth from across Forsyth County who are gaining leadership experience, representing youth in their communities, and making grants to youth-directed projects that address community issues and challenges in Forsyth County.

As promised, we will continue to keep you informed as we roll out all the strategies of the emerging direction over the coming months.

In addition, we held our fall 2017 grant cycle, which marked the beginning of our transition to the emerging direction and was the final grant cycle based on our previous focus area descriptions. The Foundation made 201 grants totaling $11.5 million during this closed, invitation-only grant cycle. We will not have a traditional spring 2018 grant cycle so that we can focus on the development and implementation of ZSR’s new emerging direction.

In terms of other major announcements, in March 2017, Trustees established the Darryl Hunt Memorial Scholarship Fund, in the amount of $100,000, to honor the life and legacy of Darryl Hunt. Beginning in January 2018, this fund will provide scholarships to individuals in Winston-Salem/Forsyth County who have been convicted of a criminal offense, have served a jail or prison sentence, and are seeking higher education. The fund is named after Darryl Hunt, who was wrongfully convicted of rape and murder in 1984, at the age of 19. While Hunt maintained his innocence, he spent nearly two decades of his life in prison before he was exonerated. After his exoneration, he dedicated his life to speaking out against injustice and as a champion for criminal justice reform, the innocence movement and wrongful conviction. Hunt worked with a number of ZSR grantees and was instrumental in helping those re-entering society from incarceration to rebuild their lives.

In September 2017, when the President announced plans to terminate Deferred Action for Childhood Arrivals (DACA), Trustees awarded $100,000 to organizations across the state through a series of “rapid response” grants – through a DACA Rapid Response Fund – to support immigrant-serving and legal service organizations that were providing DACA renewal clinics, community education, and emergency planning services for affected individuals and families through the end of March 2018. Ending DACA would rescind work authorization and protection from deportation for nearly 800,000 undocumented young people and could have a devastating impact on nearly 27,500 DACA recipients in North Carolina.

In October 2017, two new program officers – Tania Durán and Sorien Schmidt – joined our team. The Foundation made these hires to support the strategies set forward in its emerging direction. Both Tania and Sorien will join our existing team of program officers to develop effective strategies for the Foundation to facilitate positive change, analyze grant applications, help develop organizational capacity and evaluate the effectiveness of the Foundation’s grantees. Both Tania and Sorien bring extensive nonprofit experience and a rich background to the Foundation. We also recently announced that our interim Associate Program Officer Allie Garrett would be taking on the role of Associate Program Officer on a non-interim basis once her interim period ends in June 2018.

So, as you can see, it has been a busy year for us, and we know it has been for many of you. We want to take a moment to thank each individual and group with whom we have met with over the course of this past year. Your time and thoughtful contributions are helping us do our work better. We want to thank all the nonprofit organizations across our state that continue to do such incredible and important work. We could not do our work without you.

While we are proud of all the work that has been accomplished, we are even more excited about what 2018 has in store as we seek to improve the quality of lives for all North Carolinians. We will do it together – for ourselves, our families, our communities, and All For NC.

We wish all of you a safe and happy holiday season and look forward to seeing you in 2018.