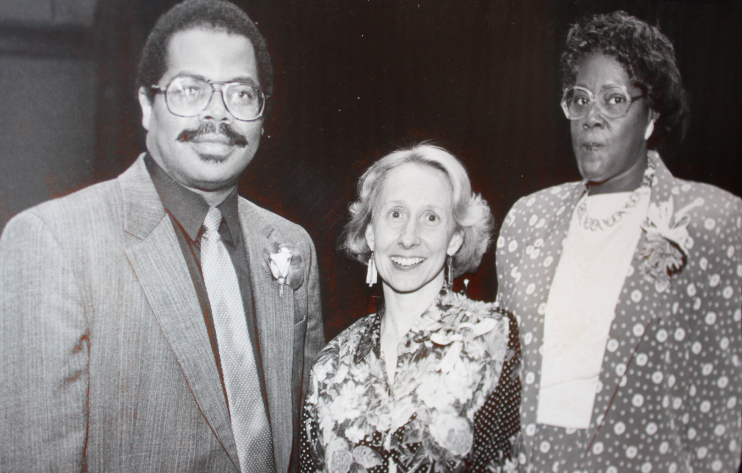 If we listen carefully, we can hear and understand voices that have been silent. If we look with intentness and patience, we can see new ways to meet old problems. And if we act together, we can bring understanding and courage where there have been loneliness and fear.

Marsha Crites has learned to be a careful steward of each of these talents: listening, looking and acting. She has a gift for envisioning ways in which people can help one another. AgeLink, which she developed at the Center for Improving Mountain Living in western North Carolina, matches older volunteers and children for after-school activities.

Elder Neighbor enables older people to continue living in their homes. United Christian Ministries of Jackson County serves the needs of the homeless.

Ted Mangum grew up in Raleigh the hard way, hanging out with the guys and fighting in the streets. He became one of the many young black males who either failed in or were thrown out or dropped out of the traditional education system. Knowing that education is a lifelong process, and understanding the frustrations of young people, Mangum has drawn on his own experiences to help make education real and exciting.

Since 1986, when Mangum founded the Research, Education and Literacy Association for Youth (RELAY), he has served as the group’s executive director, driving force, fundraiser and friend.

Rather than using lectures, his program works through visuals: video, television and photography. RELAY participants, age eight through eighteen, learn by doing. They research, write scripts, direct and produce TV shows on Cablevision of Greensboro. In the process, they learn life skills such as time management, trust, teamwork and concentration.

Mangum's sacrifice for his mission is apparent: He gave up a lucrative corporate job and a comfortable, suburban lifestyle; he drives a beat-up car; and he will get up at all hours to take RELAY students to work or to help them with homework.

Education, for Ted Mangum, is learning to love to learn, and that’s what he tries to instill in "his" kids.

Joyce Nichols was a divorced mother of three when she lived in Durham's McDougald Terrace housing project. She became an advocate for herself and for other public housing residents when she helped organize the first Residents' Council in McDougald Terrace in 1965.

When she was elected the group's first president, one of the major issues confronting residents was evictions without residents being able to defend themselves.

Then, Joyce Nichols herself received an eviction notice, with no reason given. With the help of lawyers and community activists, she took the Durham Housing Authority to court. In 1969, the case resulted in the U.S. Supreme Court’s ruling that no public housing tenant could be evicted without opportunity for a hearing.

Nichols' advocacy did not stop there. In 1968, she fought for entry into what was then perceived as a new "male profession," the physician's assistant training program at Duke University. She became the program’s first female graduate in 1970.

While at Duke, she expressed her concern about the healthcare needs of rural Durham County residents, prompting Dr. Harvey Estes, then chairman of the Division of Community Health Sciences at Duke, to secure funding for two healthcare centers. Joyce Nichols was employed as the physician’s assistant to help set up the two clinics.