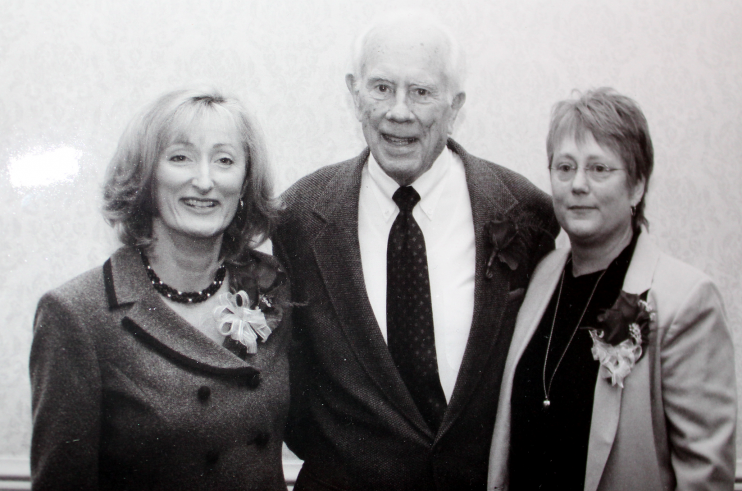 Diane Bauknight has learned firsthand the problems that parents of children with mental illness face. Twelve years ago, she and her husband, Gary Lukowicz, became foster parents to and then adopted a two-year-old named Angie. Angie, they gradually discovered, suffers the effects of fetal-alcohol syndrome, has bipolar disorder and learning disabilities, experiences episodes of rage and likely has multiple personalities.

As healthcare professionals, Bauknight and her husband knew they needed serious assistance caring for Angie. They found that they could not get even minimal help from the state or from Blue Ridge Mental Health, the regional mental health service. Talking to other parents whose children had mental illness, Bauknight learned of their lonely and frustrating experiences.

Bauknight has counseled dozens of those parents. She helped organize WNC Families Can, a support group that also works to raise awareness and advocate for mentally ill children and their parents.

Bauknight remains incensed about what she sees as the overall failure of the state’s mental health system to provide even the most basic care for mentally ill children. The General Assembly recently made some of its deepest budget cuts in the area of mental health. Believing that legal action is the only recourse for her and other parents, she is suing the Blue Ridge Mental Health center. Bauknight and her husband continue to care for Angie, now a young teenager. She also continues her fight to hold North Carolina’s mental health system accountable.

Cader Harris, 84, is not as nimble as he used to be. But his friends remember him as a bright young athlete who was a walk-on for baseball and basketball at North Carolina State University. His degree in chemical engineering started him in a promising career at Dupont, but duty called him to come home and manage the family clothing store.

Harris has been a leader in just about every civic organization in Elizabeth City. He's also served on the County Commission and the City Council. Today, he's everybody's good guy.

But back in the 1960s, Harris was the target of young civil-rights protesters. At the Christmas shopping season, they drove away black customers, eliminating profits for the year. Harris says he should have been more proactive about demands that he employ black clerks. But that’s hindsight. His family had always had good relations with the black community, extending credit liberally, and he thought time would take care of things.

Black customers began to trickle back in, but the business was in decline. Harris had to close the family store.

He was not bitter. After a Kiwanis meeting, he and a black educator, W.C. Witherspoon, decided they should get to know each other better. Eventually, they formed the Hope Group to help others make friends and communicate across racial lines. Today, 25 diverse people meet regularly to work on projects and urge racial harmony in government and across the community. Cader Harris and the Hope Group lead by example.

One of the most dreaded messages a physician can give to someone is that a loved one has Alzheimer's disease. That is why Peggy Noel founded and leads an unusual medical practice in Asheville called the Memory Assessment Center and Eldercare Resource Center.

From an early age in West Virginia, Noel knew that she wanted to help others. Her sense of personal service grew as she studied at Davidson College and at medical school at Wake Forest, and later as she served in the Peace Corps in Africa. Watching her grandmother and family suffer the effects of Alzheimer’s helped steer her toward geriatrics. When the large hospital where Noel worked closed its memory-loss clinic, Noel knew there was a better way to deal with Alzheimer’s and memory loss.

She views the disease holistically and the patients it ravages with dignity. Noel is passionate about the need for systemic changes in the way the growing number of Alzheimer’s patients are treated. She believes they should stay in their homes as long as possible, that they should not be ignored. She believes that more money should be devoted to their care. For three years, she has sacrificed her own salary so that the nonprofit clinic she founded can have a solid future.

Noel has made a great impact on the patients and families she has helped. She also has developed a new model for healthcare, and it is working.