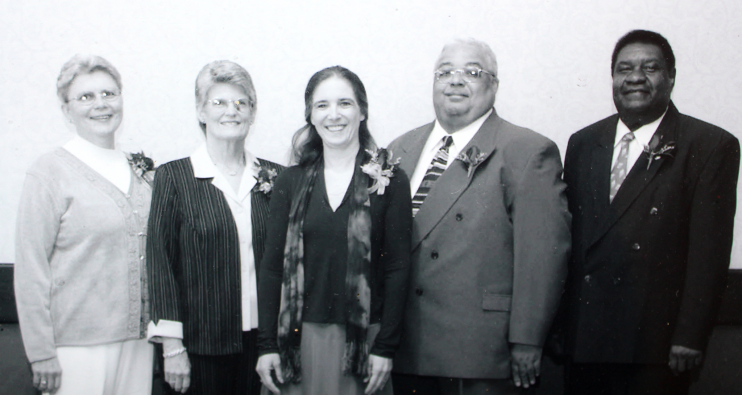 Hilton Dunlap and Bobby Person are a team - powerful advocates for people who lack the wherewithal to fight wrongful firings, denial of benefits and racial or gender discrimination. They help those who don’t know how to go up against governments that treat them like second-class citizens.

They became friends in the early 1980s, when both worked for the North Carolina Department of Correction. Person, trying to rise through the ranks, was passed over repeatedly in favor of white employees.

Dunlap, at another facility, pointed out mismanagement and favoritism, to no avail. They met and strategized. When Person's family was terrorized by the Klan, Dunlap stood by them. He and other armed friends and neighbors became the family’s only defense.

Finally, personnel in the magistrate’s office changed, warrants were issued, and Klansmen were convicted. The Southern Poverty Law Center filed a civil suit in federal court. The judgment bankrupted the Carolina Knights of the Ku Klux Klan.

Dunlap and Person, having learned a lot about how to get things done, helped the people who came to them. They helped form an organization to monitor hate groups. They sued the Moore County School Board, which had never had a black member. When the U.S. Open came to Pinehurst last year, the wily pair organized people to focus the attention of the national media on black communities that had been denied basic services as affluent towns annexed land around them. Embarrassed, the local power structure began righting those wrongs.

The horror of the 1963 Birmingham church bombing that killed four young black girls changed the life of another young girl, Deborah Miles, who that Sunday was at the church in Arkansas where her father was pastor. Now in her early 50s, Miles dedicated her life to helping the less fortunate, mainly in Asheville, and fostering better race relations. Her influence is far-reaching.

Miles became active in Asheville when she moved there after college. She helped run a group home for children, became a community organizer in the predominantly black East End, and helped start an emergency shelter and Stone Soup, a worker-owned café where social justice and equity were major items on the menu. When she married Mark Rudow, an attorney, she converted to Judaism. She was determined that their children would experience diversity in school.

Frustrated in her attempts to get school administrators to take a more inclusive approach, she founded the Center for Diversity Education in 1995. One of the keys to the Center's success in increasing diversity in K-12 classrooms is that its programs are developed in compliance with the North Carolina Standard Course of Study. Her well-packaged and immediately usable program materials are eagerly received by teachers.

The programs and exhibits are also featured in public places such as shopping malls. The Center’s programs and exhibits help educate children about diverse cultures, races and religions. As the school populations become more diverse, the materials also foster understanding and reduce prejudice.

What began with an act of kindness - tossing tennis balls to housing project children who watched her coach tennis at Peace College during the summer of 1982 - has turned into an extraordinary social ministry for Betty Anne Ford and her friend, Nancy Newell. They shy away from calling the ministry, Loaves and Fishes, a program, preferring to say they have created a family built on the relationships of many people.

Twenty-three years ago, it was a summer camp for 12 children in the housing project called Halifax Court. When the camp ended, Ford and Newell developed an after-school mentoring program so that they could keep their ties with the children and their parents. They involved friends and fellow church members as volunteers.

The children in Loaves and Fishes, their parents and the volunteers really did become a family. Ford and Newell developed deep relationships with the children, attending parent-teacher conferences, buying clothes and necessities, taking them to medical appointments. They even bought a house close to Halifax Court so that they could be there for the children and their families whenever a crisis might arise.

As they helped the children, Ford and Newell also helped countless volunteers better understand the lives of people they never knew existed.

When Loaves and Fishes celebrated its 20th anniversary in 2002, more than 200 people who had been a part of the group in one way or another came to celebrate. It was a family reunion.