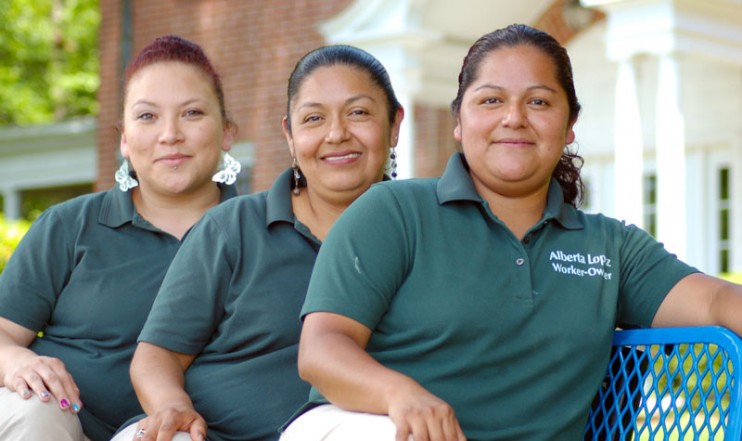 For the Center for Participatory Change (CPC), “grassroots” is more than just a buzzword – it’s a way of being. The organization opened its doors in Western North Carolina in 2000. Its mission is to empower those most affected by issues such as racial oppression and economic hardship by helping them become vehicles for change in their own lives and communities. CPC supports grassroots organizations that these individuals form, many of which become nonprofits that address community issues. CPC plays an important role by assisting these groups in helping further develop their organizations’ strategic planning and fundraising efforts as well as other capacities.

CPC also supports the development of worker-owned cooperatives – businesses where the owners are also employees. This model ensures that these workers are also driving the decisions that affect their businesses, and generated revenue goes directly back to them. For people who typically access low-wage jobs – often times this includes women and underrepresented populations – this model presents an opportunity to achieve economic stability on their own terms.

But as Antoniata Lopez, Alberta Lopez, and Alex Villaneuva will tell you, it’s not that easy. In 2010, these three women joined another three women to launch a cleaning cooperative supported by CPC called Green Muse. Although they all had prior work experience at factories and in the cleaning business, being a worker-owner was a different ball game. From financials to marketing, the women had to learn the nuts and bolts of managing a business while also learning how to work together to make the business profitable. In the beginning, when they weren’t bringing in much money, these challenges were compounded by their economic realities at home.

“When I started this, I had been working for another cleaning company, and I was earning more or less ok,” Alberta Lopez said. “But the boss found out that I was starting a cooperative, and he fired me from my job. It was just a little bit of money I was earning at that other job, but it was helping my husband within our household. I wasn’t working and I didn’t have any income, except here, I was investing a lot of work, a lot of time, a lot of gasoline [for the cooperative],” she explained.

Because of economic challenges and other reasons, three of the women who were initially involved left the business. Lopez, Lopez, and Villaneuva also faced these same challenges, but believing in the project and the opportunity it presented, they decided to stick it out. They were supported by Andrea Golden, a bilingual staff member of CPC, who had been working with them not only to develop business skills but also to help them with skills such as conflict resolution, communication, and team building.

Finally toward the end of 2012, their hard work paid off, and things began turning around. The business started growing and not only became sustainable, but also profitable. “Everything was so hard, but it was like a dream to be able to reach that goal,” Villanueva said. Through the process, the women say they have grown personally and professionally, and they now have an employment setup that better suits them. “It’s a huge difference,” Antoniata Lopez said about her experience with the cooperative. “It’s a huge advantage to know that you’re the owner and also the worker.”

Golden has also learned a lot from working with the women. “They’ve been so intentional about how to create strong relationships and how to create a business that’s rooted in the cooperative model,” she said. “Even though the cooperative was born out of necessity, it’s also rooted in values, which I think makes it really, really strong.”

Today, Green Muse is a strong, sustainable organization that is poised to expand, and it’s just one of several high capacity worker-owned cooperatives and grassroots organizations in the region that CPC works with to assist people who are trying to make a better life for themselves.

“There weren’t as many grassroots groups 10 or 12 years ago [when CPC began its work],” Golden explained. “Now, there are so many grassroots groups. There’s so much grassroots capacity. We’re at a time where we can say, [CPC] might not have to be so involved so intensely in groups’ every day work. We can take a step back and say, how do we start connecting groups to each other and build a movement?”

CPC is doing just that by creating peer networks among its grassroots affiliates, including a network specifically for worker-owned cooperatives. The network will allow for learning between new and existing groups, which CPC ultimately hopes will encourage the growth of a robust, regional worker-owned cooperative-based economy. Green Muse will be a key partner and peer for CPC during the launch of this network.

“I think here, a really good job was done because Green Muse is strong,” Antoniata Lopez stated. A mother of four, she said that what was most exciting about the future of Green Muse was being able to better position her family, especially her four children, in a more stable economic situation.

“And to give the same opportunity to women, just like ourselves,” Alberta Lopez added. Others, Golden hopes, not only at Green Muse, but across Western North Carolina.