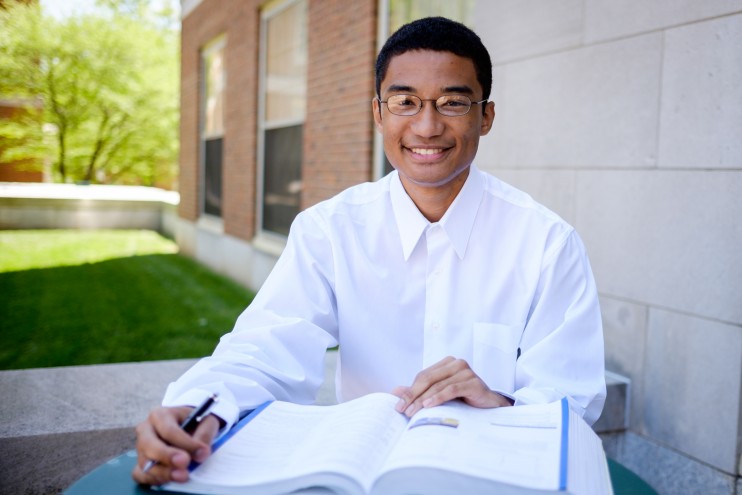 While in high school, Chris learned about Wake Forest University’s extensive study abroad opportunities and fell in love with the school.

His dream of studying abroad quickly became a reality when he was awarded a Zachary T. Smith Leadership Scholarship – a competitive award made possible by the Z. Smith Reynolds Foundation and given to incoming Wake Forest University freshmen based on need, leadership experience, and academic standing.

But before jet setting to another country, Chris wanted to become an active part of the University. When he arrived on campus freshman year, he made a conscious effort to immerse himself in the local culture.

“I love Wake Forest sporting events and being with friends. I don’t worry too much about what the score is, but rolling the quad and storming the court are really fun.”

In addition to athletic events, Chris has a deep appreciation for campus-wide traditions like Wake ‘n Shake and Hit the Bricks: two events that raise money for cancer research.

“Those events are very special to me, even though I’ve never had a family member diagnosed with cancer. The most impactful part of both Wake ‘n Shake and Hit the Bricks, other than just having fun with friends, are the survivor talks and being able to talk about the deeper stuff. It gives me strong empathy for others.”

In his first few years at Wake, Chris also found his academic passion in the Health and Exercise Science (HES) major. Though Chris had taken more business classes in high school, his "big brother" mentor in the co-ed service fraternity, Alpha Phi Omega, inspired him to think about HES.

“My big brother wanted to do physical therapy specifically, and I decided I wanted to do that too. It was really through him and that mentorship that I decided to do HES.”

After declaring his Health and Exercise major relatively early, Chris’ chance to study abroad finally came. During the spring semester of his sophomore year, the HES department planned a rare trip to Venice and for the first time, Chris was on an airplane, flying across the ocean.

“I didn’t want to study abroad too late, because I didn’t want to be too accustomed to Wake and not want to leave. Going to Venice was one of the best experiences I’ve had in college, partly because I lived in a house with all Wake students. I learned to be more responsible and became more independent, even though there was a little bit of a culture shock with a new language.”

Chris is now making post-graduation plans. In the fall, he will start graduate school at the University of North Carolina Chapel Hill working to become a Doctor of Physical Therapy. With this degree, he hopes to eventually work in a clinic or move into academia.

Having mentors at Wake, both through the HES department and through his extracurricular activities, has been extremely important to Chris. He attributes the professional path he took to the direction they provided him with.

“Faculty at Wake have influenced me a lot, including my HES professors. I really look up to them. I want to be like them through teaching and help other people like me.”