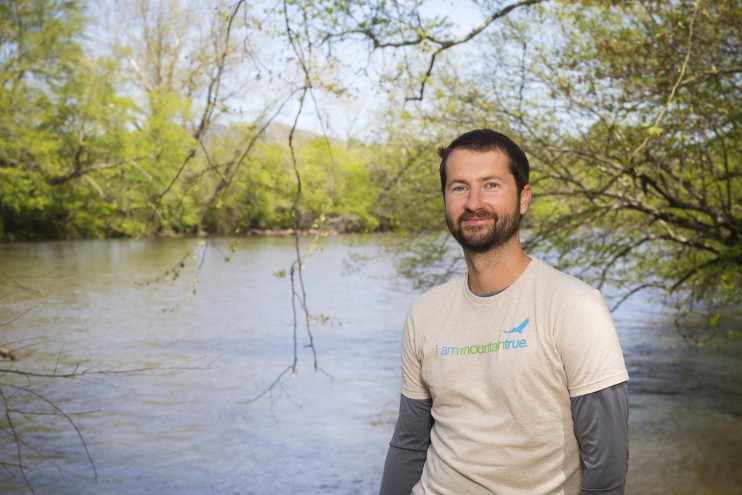 We recently joined Carson on a float down the French Broad to learn more about his work, river pollutants and the importance of healthy waterways.

It's kind of a cross between a scientist, a lobbyist, an educator and an outdoor recreation guide. We do a mix of all of those things – from outdoor water sampling, identifying pollution sources, educating kids on the importance of water quality and taking guided paddle trips to lobbying our local, state and federal officials on good environmental policy and everything in between.

They're all different which is why I really like [my job]. Yesterday I sat and answered emails all day and tried to catch up from being on vacation. Today I'm out paddling the river. Right before I left we were taking water samples around an old hazardous waste site, trying to determine its impact on one of the tributaries to the French Broad.

I grew up in the middle of Georgia. I started coming to summer camp up here when I was about 8-years-old. I loved the mountains of North Carolina, loved the rivers and hiking and camping. As we got a little bit older at summer camp, they would take us on paddle trips. Our first paddle trip was the French Broad. We paddled down from Hot Springs, did a three-day, two-night trip, and that was my first overnight canoe camping trip.

I went to grad school at University of Montana, [then] worked for the Bureau of Land Management and the Forest Service a little bit. When it came time to think about where I wanted to settle down, this area kept popping back up because I spent so much time growing up here and I loved the mountains of Western North Carolina. Asheville became to the go-to spot.

4. When did your interest in the outdoors evolve into a career?

As I got older I realized that [recreation] was closely tied with protecting the outdoors. Nobody wants to paddle a polluted river or hike in a forest that's been ruined from bad land management. I probably connected those in college — protecting the resources is important if you want to enjoy the resource, which is partially why we do a lot of recreation stuff. I definitely think it's important getting folks out on the river, enjoying the river. And they’ll hopefully take the same path I took – enjoying the river, they'll connect with protecting the river and not wanting to see pollution.

5. Do you have a favorite task as the French Broad Riverkeeper?

My favorite thing to do is to paddle and sample a pollution source. You're getting the fun of paddling, but you also get to play scientist and detective, and get to figure out where a certain pollution source is coming from. If you can conclusively prove there's a pollution problem from your sampling that opens up a lot of options on being able to fix that. Everything from calling the person or company polluting and working with them to fix the problem, to legal action.

6. What happens when you find the source of a river pollutant?

It widely varies on what the pollution is, where it's coming from. If it’s a leaky sewer pipe, you call the sewer authority and they come and fix it. If it's an old hazardous waste site that's long-abandoned, that's much more complicated. Probably the most common things we run into are contamination from bacteria sources, which can be sewer, septic, agriculture, those kinds of things, and sediment impacts – construction sites that are failing to control their erosion and agriculture that’s eroding soil into the stream.

The key thing is not polluting the river in the first place. It’s hard to clean up when it's dirty, so it's much better to prevent the source of pollution to begin with. Things like sediment and heavy metals, those are really hard to remove out of your rivers once they're in there.

7. Why should people care about the health of rivers if they are not interested in paddling or outdoor recreation?

We all get drinking water out of our waterways and people like to eat trout – trout fishing in Western North Carolina is a $170 million industry. People come to the mountains to catch trout, to see rivers and float down rivers. Rivers, particularly in Western North Carolina, are a major economic engine. Whether you use them or not, you’re benefitting from the jobs and economic boost they provide.

It's something that impacts everybody regardless of whether you like canoeing or fishing. And everybody wants clean drinking water, and I think everybody wants a healthy river that can support fish and wildlife propagation.