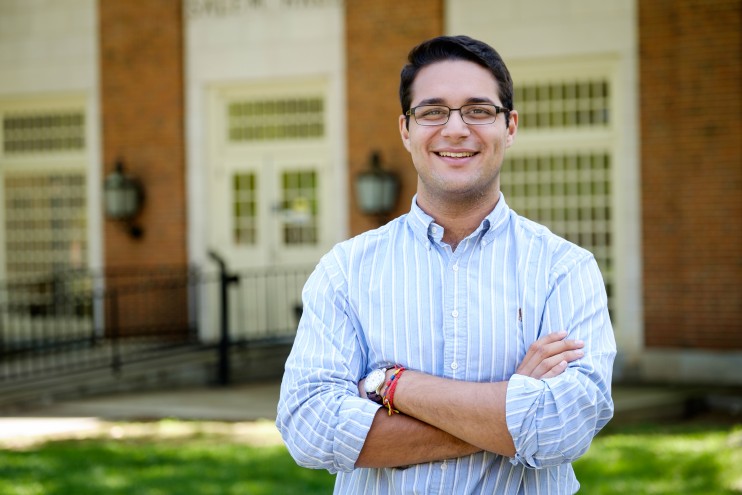 During Hakeem’s senior year of high school, his father was preparing to move back to his home country of Morocco and wanted Hakeem and his twin brother to stay in North Carolina for college. Mostly for his father’s sake, Hakeem applied to Wake Forest.

He stepped onto campus for the first time after being selected as a finalist for the Joseph G. Gordon Scholarship – an award made possible by the Z. Smith Reynolds Foundation and given to up to seven extraordinary students entering Wake Forest University who show exceptional promise and leadership.

“I thought, this is the school I need to go to. Even if I don’t get this scholarship, I have to find a way to come to Wake.”

Luckily Hakeem did get the scholarship and for the past three years of his college career, he’s been working hard to “give back for all of those opportunities given.” This past Spring, he was elected Student Government Speaker of the House. He ran on a platform that stressed diversity and inclusion among Wake Forest’s campus.

In this new leadership position, Hakeem hopes to promote a culture where groups like student athletes and international students feel like they have a voice and are an important part of the student body.

“Getting more representation in the Student Government Senate from those groups is the ultimate goal,” Hakeem said. “I used to be a cheerleader. I always had time conflicts with practice. I want to figure out a way for the Senate to meet that works for everyone. All students should be able to voice their opinions with what’s going on and not just fall by the wayside.”

Hakeem strives to help others in more ways than just student government. Through his major, Chemistry with a concentration in Biochemistry, he’s conducted independent research with faculty members and studied bacterial iron sulfur clusters, a complex study that hopefully “will progress medicine and help us learn more about bacteria.”

By applying for summer funds through his Joseph G. Gordon Scholarship, Hakeem also traveled to the Canary Islands for two months to do clinical research on cervical cancer through Hospital Universitario de Gran Canaria Doctor Negrín.

“I got really close with everyone over there and got to help them translate between Spanish and English,” Hakeem said, who is a fluent Spanish speaker.

It could also be because of Hakeem’s own unique background that makes him so interested in giving back through student government and medical research.

“I was really impoverished growing up. My mom was on Medicaid and she was right on the poverty line. Coming to Wake was hard at first, but I like sharing with other people and learning about their experiences too.”

Hakeem’s experiences during childhood are also what’s leading him to tackle his biggest goal yet; pursuing an MD/PhD to become a both a physician and scientist.

“When my parents were going through hardship, it seemed like they didn’t have the answers, but the doctor always did have the answer. Now, after learning more about how medicine works, I realize that’s not true – doctors don’t have all the answers – there’s still research to do. But it’s about being positive and following your drive to help people.”

And for Hakeem, he thinks his calling and drive might be specifically in pediatrics or family medicine.

“I want to give back to other kids like the doctor I had when I was younger. My pediatrician always made me feel like there was hope, and I want to give that back.”