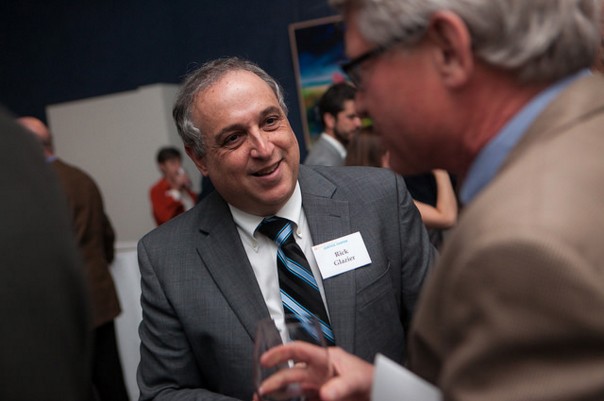 In late summer of 2015, Rick Glazier became the new Executive Director of the North Carolina Justice Center – a Z. Smith Reynolds Foundation grantee that works to eliminate poverty in North Carolina by ensuring that every household in the state has access to the resources, services and fair treatment it needs to achieve economic security.

Prior to joining the Raleigh-based nonprofit, Glazier served seven terms from 2003-2015 in the NC General Assembly as a state representative from Cumberland County. He has received numerous accolades including in 2015 being awarded the Order of the Long Leaf Pine by Governor McCrory.

The Z. Smith Reynolds Foundation asked Representative Glazier a few questions to learn more about his background and the work he hopes to accomplish during his tenure with the NC Justice Center.

1. Representative Glazier, please describe for us what you see as the mission, and most important work, of the NC Justice Center.

The mission of the North Carolina Justice Center is to eradicate poverty and its effects from the lives of North Carolinians. Our work focuses on issues such as, but not limited to: strengthening public education, assuring access to quality health care for all, providing living wages and safe working conditions for employees throughout the state, ensuring the existence of a safety net of assistance for our most vulnerable populations, advocating for fair housing practices and consumer rights as well as environmental justice for poorer communities, and finally working to build a fair, sustainable and responsible budget and tax policy in North Carolina that truly benefits all of our citizens.

2. Why did you want this job at this particular moment in NC and how will your values and experiences inform your leadership in this position?

This is a critical moment in NC history, with an altered context that has challenged assumptions, protections, institutions and programs many believed were sacrosanct – not because they were infallible, but because they were a dynamic and vital part of the progressive, moral and economic fabric of North Carolinians’ lives. Many of these are sadly now under real threat of serious generational harm, including public education, the university system, our natural resources, voting and civil rights for all, and a true safety net of economic protections for our most vulnerable populations. The Justice Center leads in the fight for an economy that works for everyone. Becoming executive director of the Center was one of the few jobs I would have resigned (and did resign) from the legislature to accept. I hope my 13 years in the NC House and prior six years on the Cumberland County Board of Education, as well as work with a number of nonprofit organizations (like the UNC Center for Public Television, NC Public School Forum, Cumberland County Child Advocacy Center, and Fayetteville Urban Ministry) will inform my work at the Center.

3. What have been some of your proudest accomplishments throughout your career?

My proudest accomplishments are my children and grandchild and the kindness of their hearts and spirit. Paraphrasing Anna Quinlan: you have your work, and you have your life and the first is only a subset of the second. Nothing can replace a life well lived and nothing compares to the love of your family. To the extent the question relates to my professional career, I was lucky enough in my first case as a private lawyer to have that case heard by the United States Supreme Court and for that case to set the law of the country on excessive use of force claims under the Fourth Amendment. In the House, I was lucky enough to be a part of a number of legislative coalitions that eliminated smoking in public buildings and restaurants; created the nation’s first actual innocence commission; reformed the criminal justice system by requiring audio or video taped confessions in serious cases, advanced and fair protocols on eyewitness identifications, and increased use of DNA testing; passed the South’s first fully enumerated anti-bullying act for public schools; enacted the most comprehensive school safety bill in the nation after Newtown; created major protections from predatory insurance and finance scams for military personnel; revised and rewrote the state’s exceptional children's education laws; accelerated resources for academically gifted as well as at risk students; and passed and enforced major ethics reforms in state government.

4. What would you like the Center to achieve during your tenure?

I hope the Center will continue to experience the extraordinary substantive success it has achieved in its first 20 years of existence, an anniversary we will celebrate this coming year. The Center staff and Board will be engaged in a substantial long term strategic planning effort this spring to enhance the delivery of our services, the efficacy of our advocacy and the reach of our communications and community engagement. Our efforts will be focused as well on creating a dynamic development capacity, one that can and will sustain the vital work of the Justice Center for generations to come. The fight against poverty and its effects is a marathon and not a sprint, and thus the Center has to be prepared to fight that battle with sustained resources to prevail over the long haul. Like any executive director, I want to leave the Center, whenever that occurs, stronger and better than when I came to it.

5. What are some opportunities for the Center?

A myriad of opportunities loom on the horizon: creating a more functional structure for a 21st century nonprofit engaged in the comprehensive anti-poverty work that forms the core of the Center’s mission; moving to a more rigorous communications and community engagement capacity that matches the needs of the ninth largest state in the nation and reaches more deeply into all areas of the state; creating more meaningful dialogue with clients about what we can do that would be most helpful to and for them – giving them a greater voice in their own destiny and focusing on local solutions to problems as opposed to state and national solutions wherever possible; and certainly ensuring the growth of the Center and providing the resources for the work through a vigorous development and endowment capacity.

6. What is your hope for the future of North Carolina, as it pertains to your work?

For North Carolina to once again be the progressive face of the New South, to be the economic and educational envy of the nation, and for our state to be a kinder, wiser, gentler place to live for all who reside here. I want this to truly be a place where the weak grow strong and the strong grow great. I want this to always be a place where the next generation of North Carolinians want to live, work and raise their families. I want North Carolina to be a place where all people are treated with respect, dignity and civility and where no child is ever forgotten in the crossfire of an uncaring home, community or state. Our work at the Center is devoted to making sure these hopes come true for all of us.