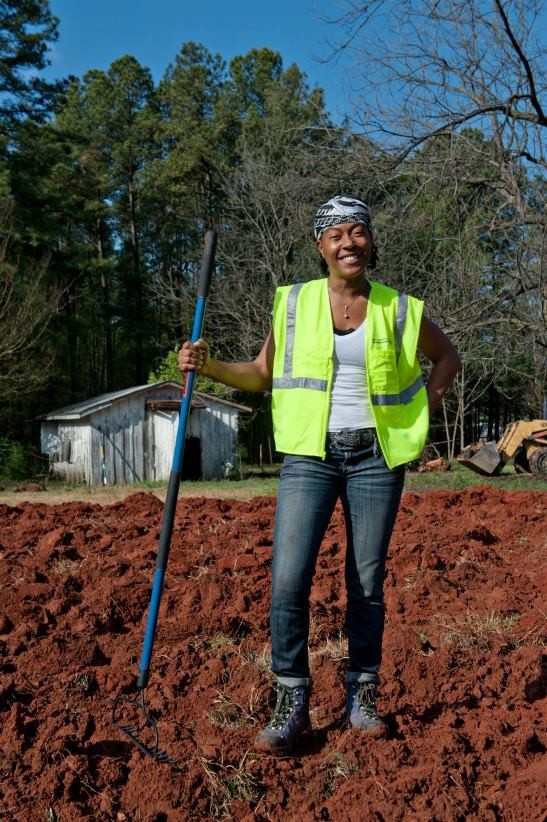 Robin Emmons is the founder and executive director of Sow Much Good, a Charlotte-based organization that is committed to eliminating the socio-economic, racial, and ethnic health disparities that result from a lack of access to fresh, nutritious food. Through community-based programming and initiatives, the organization provides organic, fresh food to people living in urban food deserts or neighborhoods otherwise identified as “food insecure” and inspires individuals to take charge of their health by promoting healthy lifestyles through food and nutrition. Since 2008, Sow Much Good has grown more than 30,000 pounds of fresh produce for underserved communities in Charlotte.

Emmons, an advocate, activist, humanitarian, and farmer, was honored for her vision and work in 2013 as a CNN Hero.

The Z. Smith Reynolds Foundation asked Emmons a few questions to learn more about her background, the organization and what she he hopes to accomplish moving forward.

1. You were in the corporate sector for 20 years before founding Sow Much Good. Tell us how you came to this work.

I came to the work through a longing for greater meaning and purpose in my life, and by recognition of a number of needs of a chronically homeless and mentally ill loved one for whom I gained guardianship, and secured housing, behavioral health and social services in 2008.

2. What has surprised you the most as you continue doing this work?

I have been increasingly surprised at the great disparity in access to such a fundamental need amidst a thriving local foods movement locally and nationally. It amazes me still that, as a country, we have long held ourselves as the land of plenty. And yet, a significant proportion of our population continues to suffer the effects of food insecurity, hunger and food desert conditions.

3. What has this organization meant to the community?

In Charlotte, for many low-income communities, SMG has meant a child does not go to bed hungry. Families that formerly had limited or no options to secure fresh food, now feel confident that they can access, geographically and economically, healthy food. It has meant that thousands of individuals who access our markets throughout the seasons are saved from the ravages of "nutritional" starvation and the long-term, detrimental effects of a steady diet of "fringe and Franken" foods which, before SMG, were the only available options in their neighborhood.

4. What are some of your proudest accomplishments?

Media accolades or acknowledgement of a job well done by my board of directors are nice, but they are not my proudest moments. Instead, it is the hug from the grandmother raising five grandchildren on limited income and public assistance, and who is a member of our low income, EBT accessible, CSA (Community-Supported Agriculture). It is the single mom who brings her small children to the market in her neighborhood interested in the food, but also in finding out how her children can volunteer on the land, to learn more about farming and where food comes from. It is the high school student who one assumes at first is uninterested and aloof and, yet, tells his friends that interning at SMG is amazing, and brings them along to help harvest tomatoes or okra from our urban farm site at his next visit. It is the elderly gentleman who shares with me stories of growing up on a farm as a small boy, under the watchful eye of sharecropper parents in a small town, which was then segregated. It is his affirming words "I'm proud of you" followed by a few words of advice on how best to grow turnip greens. It is serving as a convener of food, resources and people, which leads to the revitalization of fragile and underserved communities. Those are the accomplishments that most fill me with pride.

5. What do you feel like you have yet to do?

Six years into the work, I am aware of the larger structures and systems that perpetuate food inequities. That said, my work is far from done. Today, it involves continuing to serve as a steward of the land and in the community. It is also "growing capacity" in the communities we serve through advocacy and training. By using SMG as greater convener of resources we are building skills in marginalized communities that so that they can affect local, state and national policy change that will ultimately transform underserved communities into well-served communities.

With that, we move Onward & Forward!