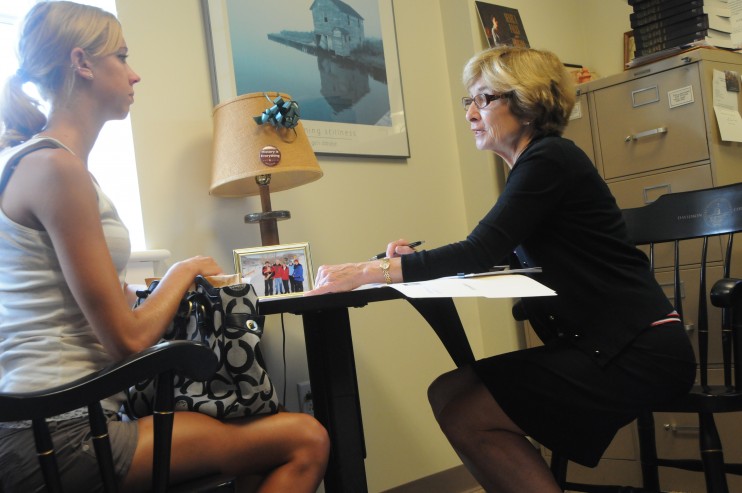 We recently spoke with Dr. McMillen to learn more about her work in Southern and Women's history as an author, researcher and professor at Davidson College.

1. You grew up on the West Coast, went to school on the East Coast and then moved down South, where you started your teaching career. Why the South? Why Davidson?

I became really fascinated with the South, because I didn't understand it at all. It's very, very different from the west or the northeast. I decided to get a master's from UNC-Charlotte, thinking I would just teach history, but then went and got my doctorate from Duke University in Southern history with a focus on Antebellum Southern women.

In 1988, I came to Davidson. The job [at Davidson] was my dream come true in terms of liberal arts colleges, which I've always believed in. I was so lucky to get the job. The students are really, really bright and work hard.

2. How has your research influenced you?

What I found in studying Southern history was that if you can understand the South, particularly in the years before the Civil War, you can have a better understanding about our country – not only in terms of the impact of slavery, racism, and white attitudes, but also in African American attitudes. That's been pretty transformative. Growing up in California, I never really thought about race, because it wasn't a big issue [for me]. Today, it is, and by having a good grounding in Southern history I can better understand the depth of feelings on both sides.

The thinking is true of attitudes toward women. There's a more traditional view of women in the South, which was really hard to get used to. I was used to being very outspoken and just myself. Fortunately, in an academic environment that is not as important.

3. Tell me more about your current research.

Right now, I am working on a third edition of a textbook I wrote on Antebellum Southern women, Black and White, in the Old South. I've been collecting material written in the past ten years on Southern women to incorporate into the new volume. That's supposed to be finished by the fall of next year.

My biography of Lucy Stone, the abolitionist and suffragist from the 19th century, came out towards the beginning of this year. I would love to promote Lucy more, because I think people don't know what an incredible woman she was. Any invitation I get to talk about her I welcome.

4. What would you say is one of Lucy Stone's characteristics that you identify with?

She was an amazing teacher, who taught about the evils of slavery and the oppression of women. I hope I convey some of that in my classroom.

One thing I admire about her, and I think I see this in myself, is [her] incredible determination. Having goals and then doing everything you can to achieve those goals. Her goals were much larger than mine are, but I hope I have a little of her in me. I just admire her so much.

5. How has your success as a researcher and an author influenced you as a teacher?

When I wrote my book on Seneca Falls and then my biography of Lucy Stone, one of my major efforts was to make the books readable and accessible. I actually dedicated the Seneca Falls book to my students. I've used [my books] in class, not to make money, but to make history more accessible to the public and not just to other historians.

The research I have done for my books has formed my teaching. You learn so much. Both experiences play on one another, add a lot to myself and add to what I do.

6. What would you say is the biggest learning experience from this professorship?

I consider it such an honor to hold an endowed chair. The money, let's face it, has helped me do research. For instance in researching Lucy Stone, I had to spend time at Oberlin College and the Schlesinger Library at Radcliffe overnight or for a week at a time. On other occasions, I've hired students to go with me to do research, which was great fun for them and for me. Just having the financial resources to do that kind of research is really, really great.

It's been a real honor and [has been] very helpful to me, so I'm ever grateful.