What you may not have heard is that the nonprofit sector – a sector that contributes 425,000 jobs in North Carolina – has long struggled to keep up with these changing demographics. Caucasians make up 82 percent of nonprofit professionals, 86 percent of nonprofit board members, and 93 percent of nonprofit CEOs in the United States, according to BoardSource's 2012 Nonprofit Governance Index and the Independent Sector’s most recent Nonprofit Almanac. A 2011 national survey of nonprofit professionals by Commongood Careers and the Level Playing Field Institute similarly noted that "people of color are significantly more likely to be an organization’s primary clientele than they are to be its executive directors or deputy directors."

There are a number of reasons for this gap in representation, one of which is the prevalence on upaid internships in the sector. Internships can be entry points for young people to consider possible careers, but many students cannot afford to work in unpaid positions, and the nonprofit sector often cannot afford to spend its resources on internships.

Former fellow Allie Yee and I recently presented on this topic at the 2014 JAG Unity Summit, co-hosted by Emerging Practitioners in Philanthropy and the Joint Affinity Group in Washington, D.C. In our session, entitled "Building the Pipeline," we shared our experience in developing ZSR's Non-Profit Internship Program (NPIP) – a pilot program aimed at increasing access to North Carolina's nonprofit sector.

In 2010, ZSR established NPIP as an effort to diversify the pool of aspiring, young nonprofit professionals. Every summer since then, ZSR has paired up to 20 Pell Grant-eligible North Carolina college students with 20 of ZSR's nonprofit grantees for a paid, eight-week internship. The program is intended to remove the barriers that thwart diversity in nonprofit internships and provide students with the experience and credentials they need to better position themselves for a potential career with a nonprofit organization after graduation. ZSR supplies two-thirds of the internship stipend, organizes orientation and closing events for the participants, and offers check-ins by phone throughout the summer with interns and supervisors alike. Today, the fourth NPIP cohort is hard at work all across the state, from Waynesville to Harkers Island.

The Foundation made a commitment to conduct an external evaluation of the program over the source of a six-year trial period. Three years into the process, we have documented the following progress.

ZSR's data suggests that for many NPIP students, the program has been a meaningful entrée into the nonprofit sector. 80 percent of interns reported maintaining a relationship, beyond the summer, with staff at their host organization. 100 percent of student respondents felt competitive for an entry level job in the nonprofit sector upon graduation.

There is also evidence that NPIP has helped raise consciousness among ZSR's participating grantees around the importance of adequately supporting diverse, next-generation leaders. 94 percent of supervisors said they would be willing to be a reference for their student, and 75 percent of supervisors would consider hiring their NPIP interns. Two students have already been hired full-time by their host organization after finishing college.

Some challenges have also emerged. For one, tracking student trajectories years after they finish their NPIP summer has proved to be difficult. Even for those with whom ZSR has kept in touch, it is difficult to distinguish NPIP's "impact" against other influences in their job search, from economic shifts to outside connections. Tracking organizational change among participating grantees over time is equally nuanced and complex.

ZSR staff has also realized that providing additional support from the Foundation's end is key to making the internship experience successful and worthwhile for both the host organization and the intern. For many interns, NPIP represents their real first job or their first experience working in the nonprofit sector. For many supervisors, NPIP represents the first time they are working with students outside their traditional recruitment networks. Supporting both sides of the equation takes time and resources.

However, ZSR has identified that foundations can play a unique role in helping grantees build this capacity and enhancing diversity and equity in nonprofit hiring practices. As we at ZSR consider NPIP's future during this evaluation period, we welcome thoughts from other foundations and nonprofit partners across the state, and across the country, to consider how we might expand the scope and efficacy of programs like NPIP.

We look forward to the conversation. 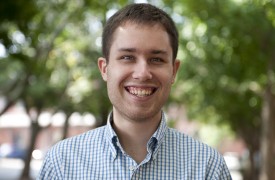